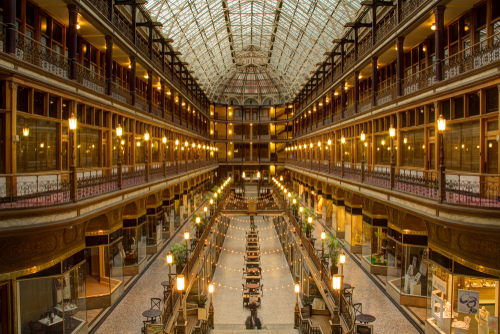 At MartelTurnkey, we’re also heavily invested in Cleveland, Ohio. While we love this city for its job opportunities for tenants, generous landlord laws and fantastic cash flowing properties, there are many other fascinating facts about Cleveland that you might like to know. We’ve compiled an assorted list of juicy tidbits about this northernmost major city in Ohio. We hope you enjoy reading them as much as we enjoyed putting them together for you!

1. Superman was born in Cleveland.  When the superhero was created in 1933, writer Jerry Siegel and artist Joe Shuster were students at Glenville High School.

2. The phrase “Rock and Roll” was first coined by Cleveland DJ Alan Freed in the 1950s, and the city also was home to the first official rock and roll concert in the nation, which was known as the Moondog Coronation Ball.

4. Margaret Hamilton, best-known for her role as Dorothy’s nemesis, the Wicked Witch of the West in the classic film “The Wizard of Oz,” was born in Cleveland.

5. Cleveland is the “Midwest Hollywood,” with numerous movies having been shot on-location in the city.  Among the movies shot in Cleveland are “Men in Black,” “The Avengers,” “Planes, Trains, and Automobiles,” and the holiday classic “A Christmas Story.”

6. Of all the orchestras that are famous worldwide, the Cleveland Orchestra is always ranked as one of the top 10 orchestras in the world.

7. Cleveland’s name is a typo.  Since the city was named after General Moses Cleaveland, it should have had an extra “a” in its name.  However, a local paper did not have enough room on its masthead for all the letters, so the extra “a” was dropped and never returned.

8. Eliot Ness, of the “Untouchables” and the man primarily responsible for reigning in crime boss Al Capone, was actually employed as a Public Safety Director in Cleveland before he moved to Chicago.

9. Cleveland has a river that has caught fire an amazing 13 times.  The Cuyahoga River, which runs through much of northeast Ohio before meeting up with Lake Erie, has had the part of it that runs through the city ablaze on numerous occasions.

10. Italian chef Ettore Boiardi, also known worldwide as Chef Boyardee for his famous cans of spaghetti and meatballs, lasagna, and other delicacies, opened an Italian restaurant in Cleveland in 1924.

11. Cleveland is a city known for fashion.  In fact, Fashion Week Cleveland is considered to be one of the world’s most important showcases for new fashions and their designers.

12. The Cleveland Merry-Go-Round Museum has long been thought to be haunted by ghosts, so beware on your next visit.

13. Believe it or not, Cleveland has 20 sister cities around the world, ranging from Lima in Peru to Brasov in Romania and even Alexandria in Egypt.

14. Cleveland has always been a science and technology hub.  Whether it was in 1879 when Charles F. Brush invented the electric streetlight, to more modern inventions such as X-ray machines and full-body scanners, you have Cleveland to thank for these and numerous other innovations.

15. The popular Life Savers candy was invented in Cleveland by resident Clarence A. Crane. Crane was actually a chocolate maker who began in 1891. In 1892, he invented “Crane’s Peppermint Life Savers” to help compensate for his fledgling chocolate sales. After overcoming numerous obstacles, the candies became a hit and still are to this day.

16. “Hang On Sloopy” is the official song of MLB’s Cleveland Indians.

17. Cleveland used to have a lively bustle of streetcars rattling throughout the city. They were discontinued in 1954, but the old streetcar tracks and connecting station still exist beneath the current city streets. Every now and then they become open to the public as a tour, so keep your eyes and ears peeled.

18. Spelunkers will be interested to learn about nearby Seneca Caverns, discovered in 1872 by two intrepid youngsters, Peter Rutan and Henry Komer. While hunting rabbits with their faithful canine, both dog and hare disappeared before the boys’ very eyes. The boys found the opening to the cavern behind a pile of brush and proceeded to unceremoniously topple in as their dog had just moments earlier. Luckily it was a small matter to escape, whereupon they reported their discovery to their families. Temporarily closed due to COVID, the cave is normally available for tours.

19. The first bank heist to ever be captured on hidden camera was committed in Cleveland, Ohio at the St. Clair Savings & Loan Co. Back in 1957, surveillance video was almost exclusively the purview of the military; it was only beginning to be used in commercial establishments. Unfortunately for the bandits, the video led to swift arrests.

Every city has its interesting past, but we like to think that Cleveland, Ohio is one of the more fascinating parts of the country. We base our investment decisions on cold, hard data, but the fact remains that Cleveland is a vibrant city rich in history and promising for the future. We continue to be enthusiastic about investing in Cleveland and we hope you are, too.