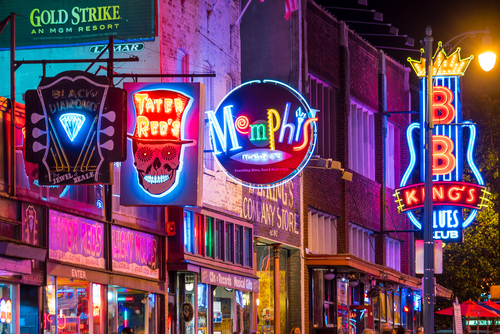 It’s essential to learn as much as you can about an area before investing. But what you need to know as an investor about a city such as Memphis often overshadows the truly interesting facts about an area. Sure, Memphis is home to some of the largest employers in the world, like Fedex and AutoZone. That’s important to know as far as job opportunities for your tenants. But did you know that the FedEx hub in Memphis was one of the filming locations for the blockbuster movie Cast Away? Cool, right? There’s lots of other interesting stuff to know about Memphis, too.

1. Memphis was named by President Andrew Jackson, who named it for the Egyptian city, Memphis.  South of the Nile delta, Memphis was a flourishing city and capital of Egypt for thousands of years.

2. Along with General James Winchester and judge John Overton, Andrew Jackson co-founded Memphis, TN with the intent to turn it into a center for commerce.

5. Beale Street is officially recognized as the Home of the Blues by the United States Congress.

6. The concept for the Memphis Zoo was started in 1904, thanks to the benevolence of Colonel Robert Galloway. Galloway sought to purchase and find a permanent home for Natch, a Southern black bear who was being constantly chained to a tree in Overton Park. A mascot for the Memphis Turtles baseball team, Natch had been traded to a local businessman as payment for a debt. Galloway got his contributions and Memphis Zoo was born. Memphis Zoo is now home to over 4,500 animals and has been ranked as the top zoo in the country by two independent surveys.

7. Piggly Wiggly was founded in Memphis as the United States’ first self-serve grocery store, where customers were finally allowed to peruse the grocery aisles for themselves. Prior to that, customers had to compile their grocery list and wait while a clerk collected the items for them.

8. Elvis Presley wandered into Sun Studio on a sultry summer day in 1954 to record a song for his mama called “That’s All Right.” It was then and there that he was discovered by Sam Phillips’ secretary and the legend was born. Elvis went on to record at least 24 songs for Sun Studio.

9. Elvis bought Graceland in the spring of 1957 for $102,500 as a gift for his parents, Vernon and Gladys. Now owned by his daughter, Lisa Marie Presley, the home was listed in the National Register of Historic Places, and in 2006 it was declared a National Historic Landmark. It’s considered a must-see for all Memphis visitors.

10. The former Lorraine Motel, where the Reverend Martin Luther King, Jr. was assassinated in April of 1968, has been converted into the National Civil Rights Museum along with surrounding buildings. The thought-provoking and inspirational exhibits on display trace the long and arduous history of the civil rights movement. Listed on the National Register of Historic Places, the museum has also been bestowed the honor of becoming a Smithsonian Affiliate museum. A tour of this important historical site is almost mandatory for visitors of all ages from around the world.

11. Way back in 1973, Fred Smith changed the world with his own dream; one of an international shipping company. FedEx began in Little Rock, AK, but was struggling to survive there. Smith decided to relocate the company to Memphis. That decision is now said to have been the “single most important economic development decision made in any U.S. city in the past 30 years.” FedEx is not only the lifeblood of Memphis, but remains the leading international shipping company in the entire world.

12. Memphis was the birthplace and lifelong home of the first black millionaire in the South, Robert Reed Church. Born into slavery, Church not only helped himself, but also his community. He founded the first local bank that would extend credit to blacks, and continually used his wealth for philanthropic purposes throughout his life.

14. Each year, Memphis hosts the World Championship Barbecue Cooking Contest , which is listed in the Guinness Book of World Records as the largest pork barbecue contest in the world. The event attracts over 100,000 visitors every year and is recognized as being the “Most Prestigious Barbecue Contest,” according to USAToday.

15. Johnny Cash went door-to-door in Memphis selling household appliances before he ever became successful as a musician.

16. By the early 20th century, Memphis had grown into the largest inland cotton market in the world. This ultimately led to the Front Street development, which is still a thriving area today.

17. Many notable and famous musicians in addition to Elvis grew up in Memphis; including B.B.King, Sam Moore and Dave Prater of Sam & Dave, Otis Redding, Muddy Waters and others.

18. One of the largest urban parks in the entire United States is located in Memphis, called Shelby Farms. Shelby Farms is 4,500 acres, five times bigger than Central Park in New York City.

19. The International Port of Memphis is the 5th largest inland port in the U.S.. Industries made possible because of this port generate over $9 billion annually.

20. The world’s largest private bomb shelter was built in Memphis in the 1960s by wealthy businessman Hoyt B. Wooten. Located beneath the Whitehaven estate, the bomb shelter is now empty but not forgotten.

21. Memphis holds the world record for being the city that inspired  the largest number of songs and titles that have been recorded and produced.

22, Every day at the Peabody Hotel in downtown Memphis, a parade of pampered ducks waddles across a red carpet into the Italian marble fountain for a delightful dip lasting six hours. This flock of feathered lovelies reside in a $200,000 duck penthouse inside The Peabody.

23. Two live goats currently reside at the famous Irish Pub in Memphis called Silky O’Sullivan’s. (It is not known what their favorite drink is.)

24. Memphis has one of the largest artesian well systems in the world. The aquifer contains more than 100 trillion gallons of water that fell to the earth as long as 2,000 years ago. It first became available to the city in 1887.

25. Memphis is a popular location for filming. At least 30 popular movies were filmed wholly or partially in Memphis, including:

– Nothing But the Truth, starring Matt Dillon and Kate Beckinsale

Over the years since its establishment in 1819, Memphis has inspired, grown, transformed and nurtured. It remains one of the most culturally vital cities in the U.S. to this day. You may never visit Memphis–when you own a turnkey rental you don’t have to babysit your property–but it sure is nice knowing that your investment property is in such an exciting and fascinating city that it attracts over 10 million visitors every year. MartelTurnkey is invested in Memphis and we continue to be excited about the many opportunities there.