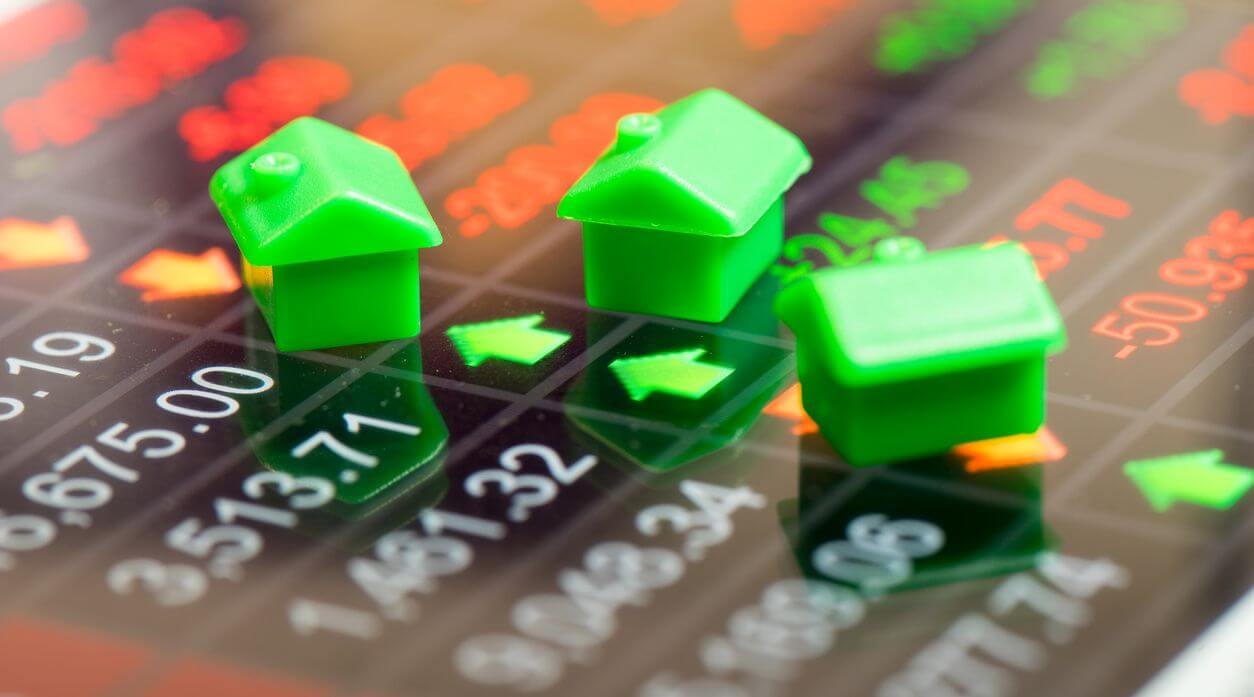 We were discussing the other day how rich one would be if they had invested in Apple stock as soon as it became publicly available on December 12, 1980.  Many articles have been written on the subject highlighting the astronomical returns an investor would have made on this iconic company.  Some articles compare Apple returns against the “investment” one would make in their home over the same period.  As we know being a homeowner is very different than being a real estate investor.  I want to go beyond the numbers in this article. Looking back at 1980, it is an easy decision to invest in Apple.  Which of today’s stock is the Apple of the future? Welcome to a tale of two investors…

I thought it would be fun to contrast how a real estate investor would have faired against a hard core Apple investor who would keep the stock for 37 years no matter what.  Remember Apple had its share of problems: product failure, market share decline, change in CEO, poor acquisitions, financial issues, lawsuits, Microsoft bailing them out, stock market crash, financial crisis, etc.  By the end of this article you will able to determine the best investment for the next 37 years.  To better illustrate the two investment strategies, let me introduce our two investors.  Mr. McIntosh who will be investing in Apple Stock and Mr. Moore who will be investing in real estate.

Our story begins in December 1980, when Mr McIntosh tells Mr Moore of a hot tip he received from his stock broker (remember those) about this new company, Apple. They have been making and selling personal computers for about 3 years and they were about to launch their initial public offering (IPO which means that they issue stocks to the public for the first time). It was not clear at that time if PC had any use beside playing games.  (Check the PC landscape of the 80’s here ).  Both investors believe that computers will be the wave of the future even though neither of them have any idea why people would use a personal computer at home.

In order to be fair I setup some guiding principles for our investors:

On December 12, 1980, Apple stock hits the market and Mr. McIntosh decides to purchase 200 shares at $22/share ($4,400 total or about $14,000 in today’s dollar) and tries to convince Mr. Moore to do the same.  I chose $4,400 as initial investment so that Mr. McIntosh would start with 200 shares even.  Mr. Moore is a more traditional investor and purchases a single family rental for $17,000 and uses his $4,400 as a down payment (25.8% down).  Mr. Moore optimized his house purchase so it would provide a small positive cashflow annually. Mr. Moore manages to secure a mortgage at 13.74% (Source: FreddieMac).  The house is rented for $250/month. After all expenses, property management costs, and the mortgage are paid Mr. Moore basically breaks even with a small Net Cash Flow of $10.  This represents a 10% capitalization rate (CapRate) which is the average of the properties that we sell on our site.

At the end of the day, our two investors meet for dinner and discuss their respective investments.  As shown in the table above, both investors have $4,400 in equity.  Mr. Moore was able to use leverage to secure a bigger asset position.  A few days later, Apple’s share price dropped to $19.40.  On paper, Mr. McIntosh lost $500 in equity but he continues to hold the stock because he is a value investor and is not concerned by these short term fluctuations in stock price.

Mr. McIntosh was seriously concerned to read in the financial newspapers that Apple CEO, Steve Jobs, was kicked out of Apple.  Steve Jobs retaliated by starting a new company, NeXT that will compete directly with Apple.  What will happen to Apple without its co-founder?  How will it affect the stock price?  How big a threat is NeXT?  Mr McIntosh has a lot of questions but no one can really answer.  He continues to hold on to the stock.

Our two investors stay in touch over the years, and on June 6th, 1987 Mr. McIntosh invites Mr. Moore for dinner to celebrate the $0.12/share dividend he had received a few weeks earlier and the recent Apple stock split.  After the split, Mr. McIntosh has 400 shares valued at $41.50/share and decides to reinvest his $48 dividend by buying one additional share of Apple.  Mr. McIntosh’s equity is now valued at $16,641.50 representing almost 21% annualized return which is significantly higher than S&P or Dow Jones estimated returns.  Below is a comparison of our investors’ positions at the end of 1987.  Please note that Mr Moore’s asset number includes the value of his property ($24,078) and $3,058 of cash accumulation (without interest) of net cash flow and the tax impact of depreciation.

However, Mr. Moore has built more than just equity, he also created a passive stream of income (Net Cash Flow) from his rental property. 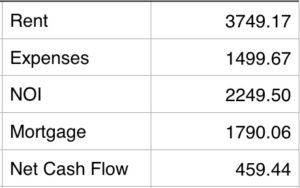 Mr Moore explains that his house value appreciated at the same rate per year as the US national House pricing index.  His property manager always kept the rent current and increased them annually based on inflation.  The next day, Mr. Moore decides to take advantage of the much lower mortgage rate 10.34% to refinance his property for 80% of its value or $19,262 and pays back the balance of his previous mortgage of $11,973 leaving Mr. Moore with net proceeds of $7,289.   Coupled with his $3,058 in cash, Mr. Moore has $10,347 cash and he decided to purchase 2 more identical rental houses for the current market price of $24,078 each.  He finances the two houses and put 20% down or $9,631.  After these transactions are completed, Mr. Moore is left with $716 in cash and the details of these transaction to his balance sheet are printed below.

During that period, Apple stock went up and down as stocks do and Apple continued paying dividends until November 1995.  Mr McIntosh stays abreast of what Apple is doing by reading newspapers and news on the internet.  Apple announces multiple acquisitions including the acquisition of Steve Jobs’ company NeXT in December 1996. Apple retains Mr. Jobs as an advisor and in 1997 Steve Jobs steps in as interim CEO.  The company is near bankruptcy and is bailed out by Microsoft in an astonishing deal.  In the face of all this uncertainty, poor company performance, product failures, change in leadership, Microsoft bail out, etc Mr. McIntosh not only continues to hold Apple stock but reinvest the dividends by purchasing 36 more shares of Apple.  In June 2000, Apple splits again and the price after the split is $55.62.  Here is the Mr. McIntosh’s position after the split.

Mr. Moore on the other hand continues to receive positive cashflow and uses the cash flow as down payment to acquire additional properties.  To illustrate, in 1990, Mr. Moore owned 3 properties for a total rent of $12,940 a year which provides a net cashflow of $1,360 once all expenses and mortgage are paid.  The 3 properties also give Mr Moore a tax credit for depreciation of $710.

Mr Moore continues to acquire as many rental units as he can afford each year and at the end of 2000 Mr Moore managed to acquire a total of 14 units in his portfolio. 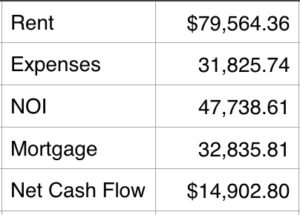 When comparing the $247k in equity created by Mr Moore’s with the $48k created by Apple for Mr McIntosh’s, there is no denying that Mr Moore is in a better position. This comparison does not even consider the present value of future cash flow for Mr. Moore.

Mr. McIntosh continues to follow the hot tip that was give by his stock broker 20 years ago.

I hope that at this point you already feel that Mr. McIntosh had to endure a lot of drama.  It was not easy for him to stay with the Apple stock.  I believe that Mr. Moore’s life was a little bit more stable. We are ending Part 1 a few months away from the stock market crash of 2000 so this is when we will start in Part 2.