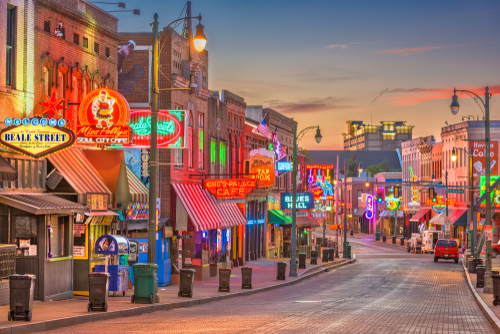 Owners of turnkey rentals in Memphis will be happy to learn that speculative interest from Ford Motor Company in the Memphis area has become a reality. Headlines read, “Ford Motor Company to invest $5.6 billion in Memphis Regional Megasite, Create 5.8 thousand new jobs!” It’s true. The Megasite is going to be home to a Ford Assembly Plant, a battery manufacturing plant, and a supplier park, all atop a 3,600-acre campus called “Blue Oval City.” The project represents the largest investment ever made in Tennessee, all under the astute administration of Governor Bill Lee. For you as an investor, it represents one of the biggest employment opportunities yet for your present and future tenants, as well as proof positive that Memphis is economically thriving.

Ford Motor Co. has committed to tenancy at the Memphis Regional Megasite in Hayward County. The automotive behemoth will rev up construction funded by $5.6 billion, which it is pouring into the project to fuel completion. The company projects the plant to be fully operational by 2025. A portion of the 3,600 acres will be occupied by BlueOvalSK battery plant, a joint-venture between Ford Co. and SK Innovation, a South Korean battery manufacturing company. The Ford assembly plant will manufacture Ford’s F-series all-electric trucks. This will establish Tennessee as “ground zero” for electric vehicle manufacturing, which, as you know, is where the automotive industry is headed.

All told, nearly 6,000 new jobs will be created with this project, in all levels of experience and background. In addition, over 32,000 jobs are expected to be created to aid in the construction work. This alone could add up to about $1.87 billion in construction salaries. Furthermore, the Center for Economic Research, a TNECD division, predicts the project to contribute $3.5 billion annually to Tennessee’s gross state product.

Let’s back up a bit. Back in June of 2021, Governor Bill Lee of Tennessee took a risk. In his uniquely forward-thinking manner, Governor Lee appropriated millions of dollars to invest in wastewater discharge pipe infrastructure for the Memphis Regional Megasite. Basing his decision largely on the “if we build it, they will come” way of thinking, the Governor stated, “We want the Megasite to be the very first place companies will look when they start looking around the country.” What Lee knew was that weaknesses were exposed at the site from an independent study that the State of Tennessee had commissioned. As Lee put it, “The combination of information from that analysis, and frankly, the increased interest that we’ve had from companies across the country, really spurred us to make a decision to move forward. What we knew was true—the fact that the pipe was not laid—could be construed as a vulnerability for the site.” The Governor’s decision to get that issue resolved was–in all likelihood–singularly responsible for Ford Motor Company’s decision to commit to the site.

Notably, the wastewater pipe construction isn’t even slated to begin until the first quarter of 2022. That’s okay, though, according to the latest news that Ford Motor Company is now a fully committed tenant. The state’s construction will happen in tandem with the car company’s own construction to get the site ready to roll into production by 2025. It’s massively impressive that the Governor of Tennessee’s word is good enough for a corporate giant like Ford.

What the Locals Think

Local leaders are over the moon about the announcement. David Livingston, the mayor of Haywood County where the Megasite is situated, said he’s been smiling for a month now, and it will take another month to take the smile off of his face. Rightly so. Livingston noted, “It’ll be more than the jobs in just those plants too. There will be plenty of jobs that will come with it, because those plants will need materials and supplies,” Livingston said. “So we can expect those [jobs] to come into the surrounding areas and counties.” In case you don’t have a county map in front of you, that means Shelby County, where MartelTurnkey Memphis turnkey rentals are. In fact, the Memphis Regional Megasite is an easy 51-minute commute from central Memphis, a straight shot up 40 East.

U.S. Congressman David Kustoff said, “Today is a truly remarkable day for West Tennessee and the entire region. Ford’s investment in the Megasite will bring in thousands of jobs and will reshape West Tennessee’s economy for generations to come. I would like to thank Governor Bill Lee and his economic development team for their hard work in securing this investment. Ford’s commitment demonstrates its confidence in West Tennessee, Governor Bill Lee and his leadership, as well as the economic opportunity of the Memphis Regional Megasite.” Again, Governor Bill Lee is being called out for his stellar vision, trustworthiness and leadership abilities.

The Megasite is physically situated in Hayward County, but officials expect that the bulk of new jobs will be filled by residents of Memphis and Shelby County. “… it will change the landscape of West Tennessee from a jobs perspective,” said Mark Herbison, Senior Vice President of Economic Development at the Greater Memphis Chamber. “This Megasite is the magic bean of economic development.”

Magic beans aside, any professional “bean counter” can see that this development is a game changer for Memphis and surrounding areas. If there was ever any doubt that you need to invest in Memphis starting right now, this news should cast away those doubts. Because where Ford Motor Company goes, other whales are sure to follow. This is very likely a giant leap toward a huge resurgence of manufacturing jobs for your tenants who live in turnkey rentals in Memphis. As Governor Lee said, “This will have a generational impact on people and families across our state, especially in West Tennessee.”

We have several turnkey rental properties available right now, in highly advantageous areas around the country. Start your real estate rentals portfolio today. Contact us to learn how.

“From the first time we spoke with Antoine, we were impressed by how knowledgeable he was. The market knowledge and plans he had for his company convinced us of his competence. We knew from the first conversation that we could become long-term partners. We have since bought many properties from MartelTurnkey and it has always been a great experience.”